The Cougars came out smokin and didn’t let up as they walloped the Blacksburg Bruins 74-46. The win improved the Cougars to 13-5 as they were led by Isaac Poe with 20 points. Miguel Garcia had 18 and CC Grubb chipped in with 17.

The Bruins got 10 points from freshman Grant Johnston with 10. J.Rob Hudson had eight points and Hank Skutt chipped in with six.

The Cougars led 16-8 after one quarter and 32-19 at intermission and never looked back. Nine of the 10 players dressed for them scored. Five players hit tree-pointers as head coach Andrew Hart got all his players into the game. Coach Hart remarked, ” We got great effort tonight on offense and defense.Our big three led us and others stepped up for us.”

The Cougar JV dropped a 48-34 decision to the Bruins. They saw their record drop to 6-12 and got seven points from Alex Akers. Ben Poe and Cole Duncan had six points each. Bruins had two p[layer score 11 points apiece, Nelson Etuk and Drew Babcock.

Note: You need or looking for insurance? You need home, life. car and /or business insurance? Call The Greg Ridpath Insurance Agency Inc.- 540-731-8696. Nationwide has the insurance to help out your needs. Call Greg Ridpath, Ethan Shores or the others agents there and tell them you saw this on RodneySportsNow.

Roanoke… The Cougars, coming off a very productive week, came out looking flat, especially on the offensive side. They were outplayed by the Hidden Valley Titans. The Cougars never could take the lead and lo 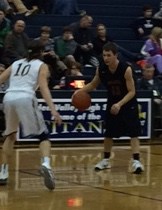 “We looked like we hadn’t been in the gym, and we haven’t,” said a disappointed Cougar head coach Andrew Hart. “Hidden Valley players made plays tonight and we didn’t. We got outplayed, and out worked.”

The Cougars fell behind 14-11 after the opening quarter, and things went down hill from there. They could only manage six points in the second quarter and seven in the third as the Titans took it 35-24 into the fourth quarter. The Cougars got some good shots in the second and third quarters, but the shots wouldn’t fall. They had too many turnovers as well as they fell further behind.

The closest they could get was 40-30 with 4:55 remaining in the game after a CC Grubb three. Then once again Pulaski Co. would either turn the ball over or their shots would rim out.

Coach Hart, remarked, “We looked like we hadn’t practiced and we haven’t. I was hoping to move the game back one day (Wednesday) but Hidden Valley said they had other games to play this week.”

The loss snapped the Cougars (12-5) four game win streak. Grubb led them in scoring with 10 points, one and three threes. Noah Bradley came off the bench to toss in eight. Miguel Garcia had six.

The Cougar junior varsity saw their record fall to 6-11 as they fell to the young Titans 50-39. The Cougars were led by big man Austin Reinhart with 11 points. He got help from Benjamin Poe with 10 and Kellen Dalton had nine points. The Titans got 18 points from Cole Cundiff.

Pulaski Co. will be back on the road Friday as they go to Blacksburg to play the Bruins. JV tips at 5:30 and varsity at 7:00.

Cougar guards Isaac Poe and CC Grubb combined to score 41 points on the night. They scored 15 of the Cougars 19 in the all-important fourth quarter. Poe knocked in 23 points and Grubb 18. Poe hit six straight big foul shots late in the game to sew up the upset.

“We played great defense in the second half on Brody Hicks. Sean Spencer and Miguel Garcia just did a tremendous job on him. He had, what 15 points at intermission, and he ended up with 19 for the game,” said Cougar head coach Andrew Hart. ”Poe (Isaac) was a weapon for us in the final quarter at the free throw line. We go as they, Poe and Grubb goes,” added Coach Hart. He then added, “Its hard not being in school and playing. My hats off to our guys for the energy they showed tonight.”

Pulaski Co. had a big week as they not only knocked off previously undefeated (in the district) Cave Spring but also defeated Salem earlier in the week. The win improved the Cougars to 12-4 overall and 6-2 in district play. They have won four straight, all in the district.

Hicks led the Knights with 19 and 6’7” center Baker Havilland tossed in 12.

Up 49-43 with 2:13 to go in the game, the Knights, Havilland hit a short jumper and was fouled. He hit the foul shot to cut the Cougar margin to just three. After a Sean Spencer foul makes the Knights go to the line, the first of one and one was missed with 1:10 to go.

Poe would then hit six in a row from the charity stripe and Grubb connected on one of two to put the game into the win column, and the Cougars had knocked off the Knights.

The Cougar junior varsity wasn’t as fortunate as they got beat by the Cave Spring junior varsity 62-53. The Knights got 26 points from guard Dawson Hicks. Austin Reinhart led Pulaski Co. with 16, Alex Akers 13 and Julian Black tossed in 10 in a losing effort.

Pulaski will go on the road next week as they travel to Hidden Valley on Tuesday and to Blacksburg next Friday.

Dublin… Playing at a slower pace and with good defense, the Pulaski Co. Cougars hung on to defeat the Salem Spartans 39-35.

With the shooting, at times, as cold it was outside, the Cougars and Spartans played a tight contest. Pulaski Co. (11-4) matched their win total from all last season as CC Grubb led them with 15 points, and senior point guard Isaac Poe hit six of eight from the charity stripe in the fourth quarter. Poe finished with 10 points.

Salem had trouble hitting from outside until the last four minutes in the game. They hit three downtown threes to put them right back in the game with under two minutes remaining. Oran Vukovic scored 10 points, all from inside the paint. Most of that came in the first half.

“I thought we played great defense tonight,” said Cougar head coach Andrew Hart. “We played much better post and interior defense the second half. They (Salem) hit three very long contested jumpers there late that made it a little to exciting.”

The Spartans (5-8) were held to single digits in scoring in each of the first three quarters. They tallied 14 in the fourth. Trevon Hill scored eight, and Shannon Davis contributed five, all in the last four minutes of the game.

Cougars got six points from Miguel Garcia and Noah Bradley came off the bench to score four.

Leading 27-21 going into the final period, the Cougars expanded that to 34-24 with four minutes to go. Davis and Amonte Pannell then hit a three and a two to cut the margin to five.

After Poe hit two ”freebies”, it was 36-29. Then Cam Spangler hit a three, Davis stroke a jumper and it 36-35 with just 1:27 to go. Poe then would hit three of four foul shots in the last twenty seconds to put the game into the W column for the Cougars.

The Cougar junior varsity lost a heartbreaker in overtime to the young Spartans 63-61. The Cougar JV had led by fifteen at intermission and thirteen going into the last quarter only to be tied up with three seconds to go in regulation. The final spoiled a scoring and shooting performance from Cougars’ Kellen Dalton. He finished the game with 30 points. He had 22 of the first 27 points for the Cougars as he stroked four threes and four twos in just over 12 minutes. Alex Akers, Jaylin Nowlin and Noah O’Dell all had eight points each. Aiden Britton had 17 for the Spartans.

Pulaski Co will be back in action Thursday night as they host the tall and talented Cave Spring Knights. Junior varsity starts at 5:30 and varsity at 7:00. The game, as noted, is scheduled for Thursday due to impending weather.

Hesus Hickman 7.6 (No longer with team)

Dublin… The Virginia High School League (VHSL) met for a couple days this week, and there will be come changes coming to area. First is Carroll Co., in the same district as Pulaski Co., was granted a move from the River Ridge to the Three Rivers District.

Oh did I forget? The districts are back and the conferences are gone. Thank goodness. So that part will be going back to the way things had been. With Carroll Co. going to Three Rivers, Auburn will move to the Mountain Empire, as will George Wythe and Rural Retreat. The Mountain Empire will now consist of Rural Retreat, George Wythe, Fort Chiswell, Bland Co., Galax and Auburn.

Graham and Grayson Co. will be moving to the Southwest District with Richlands, Tazewell, Virginia High and Lebanon. The Hogoheegee will now only have four teams left in it: Chilhowie, Holston, Northwood and Patrick Henry-Glade Spring.

The James River and Eastern Montgomery schools will go into effect this fall for the 2016 season.

Pulaski Co. will stay in the River Ridge as well as Christiansburg, Blacksburg, Salem, Hidden Valley, Cave Spring and Patrick Henry. The Franklin Co. Eagles had requested to move to the River Ridge, but the VHSL voted that down as well, not letting Franklin Co. move from a 6A school to a 5A school.

With this new setup and the districts back to being districts, hopefully teams can still have their natural rivalries, be playing schools of the same size and give them more moveability. A lot of schools have and are losing money at the gates for football, basketball and baseball.

In a lot of ways these changes are back to the future moves. There were always districts. Going to conferences was confusing to many, this writer as well. Hopefully these changes will stay in place for the most part, and people will know who plays in what district. A guy won’t have to take a quiz to see to which conference he belongs, etc.

There are still some things to change, but these are the most important changes for now.